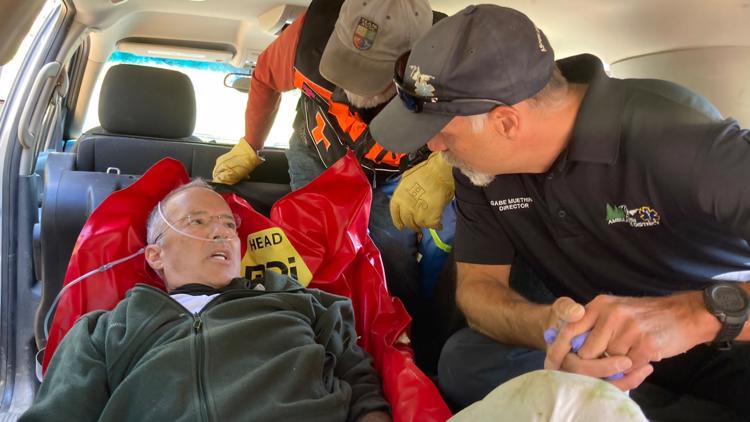 LAKEWOOD, Colo — A father who was paragliding in Aspen is beating the odds after a horrible accident that could have killed him. Jeff Sandefer said he shattered the lower part of his back after falling 100 feet into a mountain.

This summer, Sandefer was visiting Aspen from Texas with his sons. He’s paraglided hundreds of times and has been paragliding solo for about seven years. But during this flight in Colorado, something went wrong with the equipment.

“I never lost consciousness,” he said. “I was immediately paralyzed. The thought that went through my mind is I knew it would take three hours or so to get off the mountain, and it did. And I knew that if I had any internal bleedings, I would bleed to death before I got off the mountain.”

In the moments after the crash, Sandefer experienced an incredible feeling of calm.

“As a Christian, I thought, I am about to see God and I am about to see Jesus,” he said. “I don’t know what that is going to be like but I have lived a great life and it was like a blanket of peace came upon me.”

Ten friends, including his two sons, carried Sandefer down the mountain. An ambulance met them at the bottom to take him to Aspen Hospital, where he was then taken by Flight for Life to St. Anthony Hospital for surgery.

“Moving his legs and having full neurologic function was a surprise,” said Dr. Jason McGowan, a neurosurgeon at St. Anthony Hospital. “I think if you show his scan to a hundred doctors and ask what the anticipated neurologic exam is, most people would think he would be out in his legs with sensation and motor.”

Sandefer was in the ICU for eight days followed by intensive therapy in Houston.

RELATED: Mom and daughter who nearly died of COVID running Colfax 5K together

“And now it has only been 12 weeks later. I am back flying airplanes. I am running four or five miles a day. I am lifting weights,” he said.

Sandefer doesn’t know if he will paraglide again. He thinks that decision may come once he is on top of a mountain.

“I often wondered what it would be like in those last moments of life, and the thing I will take away from it is just that feeling of peace,” he said.