As Biden heads to climate change conference, half of Americans think the U.S. isn’t doing enough

Days before global climate talks convene on the need for drastic action to address the effects of climate change, about half of Americans say the United States’ current policies do not go far enough, according to the latest PBS NewsHour/NPR/Marist poll.

Next week, government officials and world leaders, including President Joe Biden, will gather in Glasgow, Scotland, to assess global progress toward the Paris climate agreement, and to make new pledges to cut carbon emissions in hopes of not dooming the planet to the most catastrophic outcome.

Global emissions have continued to climb since the 2015 UN climate conference in Paris. Despite a record dip in 2020 during the COVID pandemic, emissions have come roaring back a year later. More than half of the human-driven CO2 trapped within the atmosphere has been produced in the last three decades, with China, the U.S., India and Russia being the top polluters. 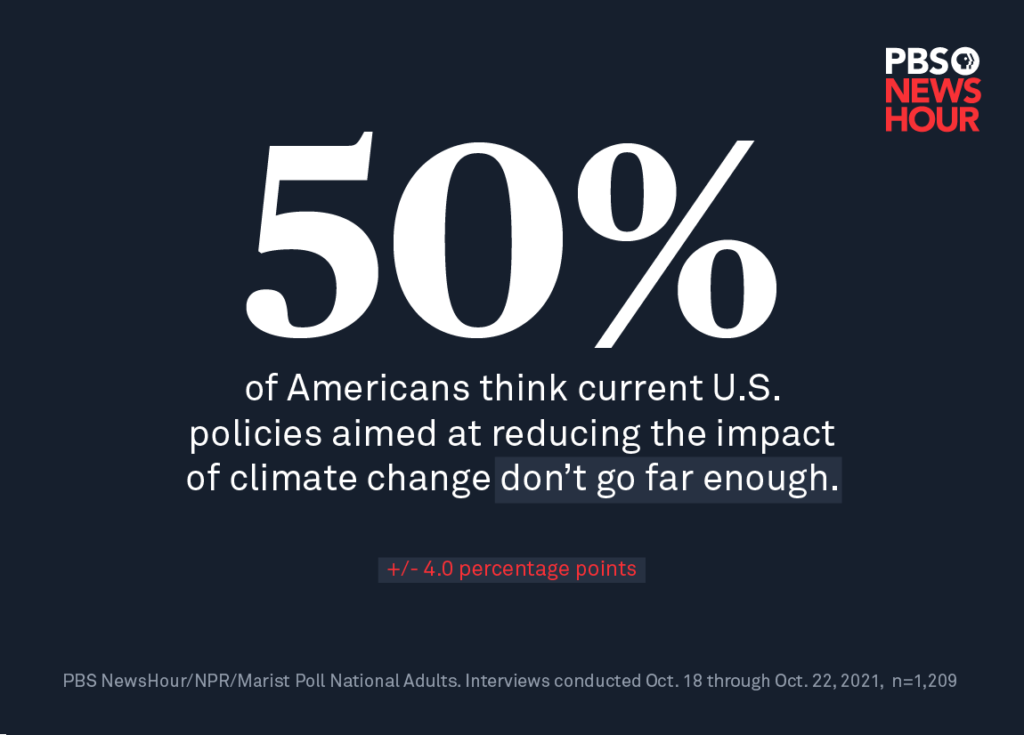 More Americans — about six out of 10 — say the global community is doing too little to address climate change. Though China has excelled in producing electric vehicles as well as wind and solar energy, some experts say the nation still produces more carbon emissions than the rest of the developed world combined. In a March poll from the Pew Research Center, 79 percent of Americans said China is doing a bad job of managing its response to climate change.

Younger people, who will inherit the choices of previous generations, were much more likely than others to feel that the global community is not doing enough to prevent climate change from getting worse. Seventy-two percent of Gen Zers and millennials in the U.S. felt that way in this poll, compared to 57 percent of Gen Xers and 54 percent of baby boomers. About half of the nation’s oldest members — 47 percent — say the global community should take further action. 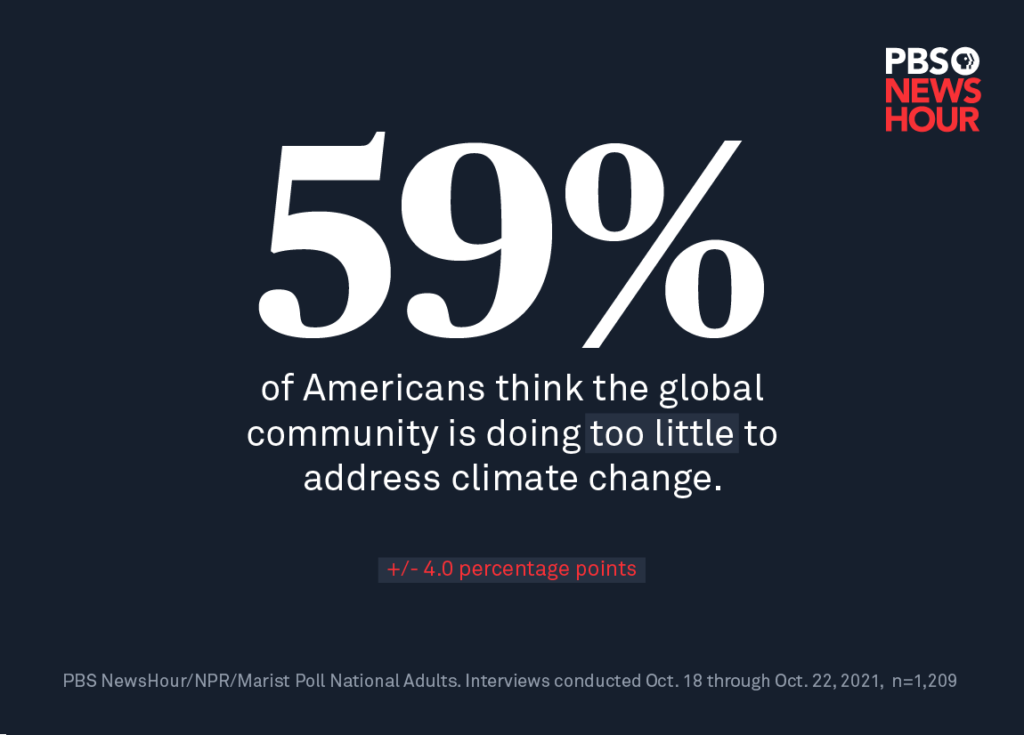 That generational support for climate change action supercedes political divides, said John Kotcher with George Mason University’s Center for Climate Change Communication, where he conducts polls for the Climate Change in the American Mind project. Kotcher pointed to an April 2020 poll that suggested 38 percent of Republican millennials and 87 percent of Democratic millennials supported climate activists who urged elected officials to work to reduce global warming. That is compared to 20 percent of Republican boomers and 81 percent of Democratic boomers who felt the same way.

“Younger Americans in both parties are more willing to engage in activism in support of climate policies,” Kotcher said.

Thinking about the nation’s current policies addressing climate change, 78 percent of Democrats and 49 percent of independents are not satisfied, according to the latest poll.

READ MORE: How global climate negotiations work, and what to expect from the COP26 summit in Glasgow

Following his inauguration, Biden rejoined the Paris agreement his predecessor, former President Donald Trump, announced he would pulled out of four years prior. He has also pushed for more robust action on climate change. A clean electricity program at the heart of Biden’s climate agenda has not survived efforts to scale back the massive Build Back Better spending plan. However, the most recent version of the framework allocates $555 billion for climate change measures, which would be the largest ever investment of its kind. 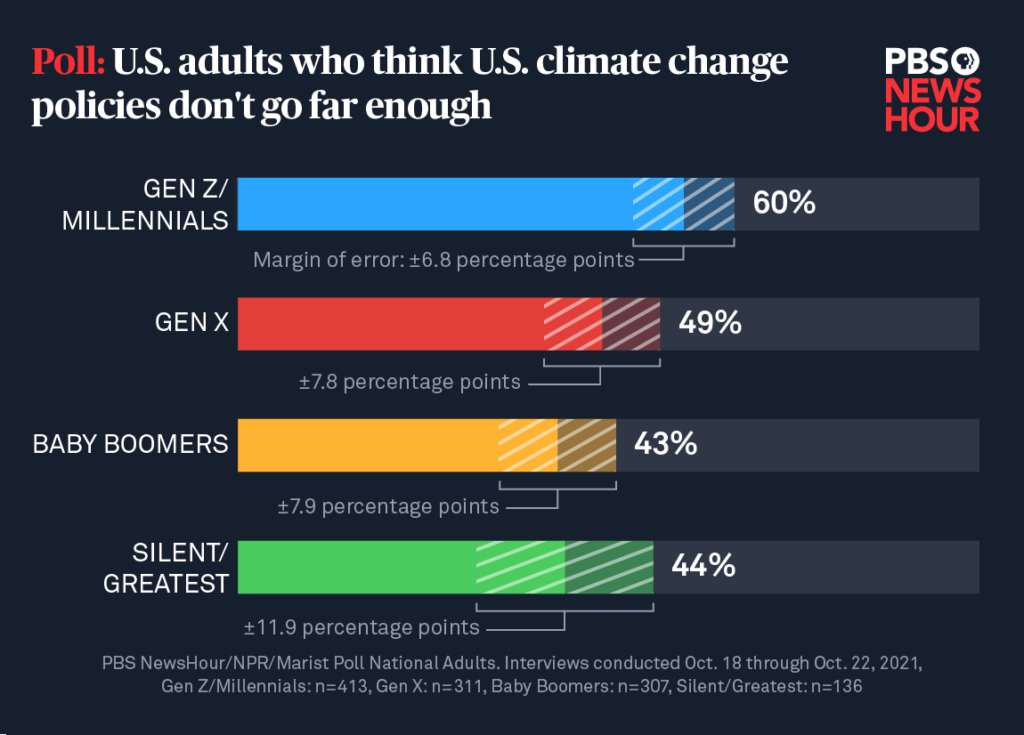 Before that may come to pass, about a quarter of the country says the U.S. has done too much already to blunt the effects of climate change. That includes half of Republicans and 56 percent of people who voted for former Trump in 2020.

Science does not support that view. A landmark report from the UN’s Intergovernmental Panel on Climate Change this year found that the burning of fossil fuels has accelerated climate change, that the planet is the hottest it has been in 100,000 years and only by dramatically cutting emissions can we avoid the worst extremes.

The signs are all around that climate change is already happening in the U.S. — smoke from this year’s wildfires raging in the western U.S. blew across the entire country, causing respiratory problems on the East Coast. An historic heat wave in the Pacific Northwest cooked mussels in their shells along the coastline at low tide. And in August, Hurricane Ida flooded communities from New Orleans to New York City.

Each year, billion-dollar natural disasters are happening in the U.S. more often — and with more devastating effects — than they did three decades ago, said Dr. Katharine Hayhoe, climate scientist for the Nature Conservancy. In 1980, the federal government recorded three such disasters; so far this year, there have been 18.